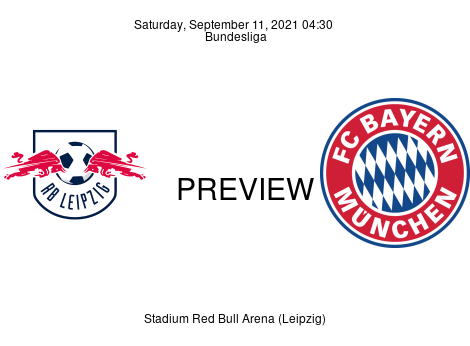 The German Bundesliga fixture, RB Leipzig vs. F.C. Bayern Munich kicks off at 17:30 (GMT+1) on Saturday, September 11, at the Red Bull Arena, Leipzig.

Preview RB Leipzig picked up a 1-0 defeat to Wolfsburg on Matchday 3 at the Volkswagen Arena. They were on the back-foot from the get-go, with Peter Gulacsi making a crucial save in the 13th minute to keep Leipzig in contention for at least a point. Seven minutes after the break, the Red Bulls conceded. Jerome Roussillon (52’) tucked the ball into the back of the net for the game's only goal after Peter Gulacsi redirected a low cross across the face of goal into his path. The defeat leaves RB Leipzig in 10th place with 3 points after 1W, 0D & 2L. On Saturday, coach Jesse Marsch will aim for maximum points, but a close look at the unimpressive form: LWL, could see him settle for a point against the Bundesliga champions. An attacking 4—2—3—1 formation is expected with Andre Silva - who has one goal and one assist in three appearances for the club - leading the onslaught. In a deadline-day transfer deal, Leipzig secured the services of central-midfielder Ilaix Moriba from Barcelona for a fee of €16M. On Wednesday, the Red Bulls will visit the Etihad for their UEFA Champions League season opener against Manchester City. Marcelo Saracchi faces a lengthy spell on the sidelines with a cruciate ligament rupture, while left-back Angelino remains in doubt for this fixture.

Preview Meanwhile, Bayern Munich remain unbeaten since Matchday 1: DWW and are in 3rd place on the table after picking up 7 points from 2W, 1D & 0L. Bayern brushed Hertha Berlin aside in a one-sided affair on Matchday 3 which saw the prolific Pole, Robert Lewandowski (35', 70' & 84') bag the 15th hattrick of his Bundesliga career. The haul also sent him to the top of the chart as the league’s top-scorer with 5 goals in 3 appearances for Bayern this season. His contribution, in the shape of an intelligent dummy, allowed Thomas Mueller (6') to score his maiden goal of the season. The 18-year-old forward, Jamal Musiala (49'), also added to the tally of five with a remarkable strike. Bayern are two points behind first-placed Wolfsburg, and a win against RB Leipzig could see Die Roten move to the top of the table. Assuming Wolfsburg fails to defeat Greuther Fürth, and Leverkusen fails to win against Dortmund on Matchday 4. After another eye-catching performance on Matchday 3, Musiala will certainly be in contention for another starting role at the expense of Leroy Sane. A 4—2—3—1 formation with Robert Lewandowski at the top of the shape is expected, while the trio consisting of Musiala, Mueller, and Gnabry could line up behind him.