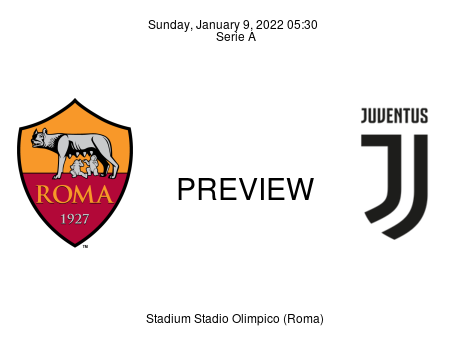 The match between AS Roma and Juventus F.C. will take place on Sunday, January 9, at 18:30 (GMT+1) at the Stadio Olimpico.

Preview Nine-man Roma failed to impress against AC Milan and suffered a 3-1 defeat to the Rossoneri at San Siro on Thursday. Milan started on the front foot, earning a penalty in the opening minutes after Tammy Abraham’s outstretched arm took the bite off of Theo Hernandez’s strike. With Kessie unavailable for penalty duties, Giroud (7' P.) stepped up and converted, leaving Roma with a one-goal deficit. Poor in the final third, Roma’s problems were further compounded by an error at the defensive end. A gift left Junior Messias (17') with a clear shot on goal after Olivier Giroud’s rebound off the woodwork. Zaniolo tried to curl one in, but Milan’s shot stopper, Mike Maignan, was having none of it. Tammy Abraham (41') made up for giving away the penalty with a cheeky flick-on, which left Maignan wrong-footed. Second-half substitute, Rafael Leão (82'), raced away towards goal after combining with Zlatan for Milan’s third goal, leaving lackluster Roma with a two-goal deficit at full-time. The performance was of such a low level, the quality was really lacking today, Jose Mourinho told DAZN. I didn’t like the referee or my team today, the Special One said, adding to the long list of referees he dislikes. It was Roma’s second defeat in five Serie A games: LWWDL, which saw the club move from 6th to 7th place. Roma is left with 32 points after 10W, 2D, and 8L. José Mourinho aims to bounce back to winning ways, but picking up three points against Juventus will be a tall order. For this match against the Old Lady, a 3—1—4—2 formation with Zaniolo and Tammy Abraham in attack is expected. Meanwhile, Rick Karsdorp and Gianluca Mancini both picked up red cards against Milan and are suspended for this fixture against Juventus.

Preview Juventus salvaged a point in the 1-1 draw against Napoli on Thursday at home. Napoli's all-time top scorer, Dries Mertens (23'), left his side in the lead inside the first thirty minutes. But the Old Lady found the leveler minutes into the second half through Federico Chiesa (54’). Despite several clear-cut chances at both ends of the field, both sides failed to find the back of the net and settled for a point each. With the draw, Juventus remains in 5th place on the Serie A table, having picked up 35 points from 10W, 5D, & 5L. The Girlfriend of Italy remains unbeaten in five Serie A games, WDWWD, ahead of this fixture against AS Roma, and a win here would see the Killer Lady remain within touching distance of the top-four. Massimiliano Allegri’s 4—3—3 formation could see Morata as the focal point of attack once again.