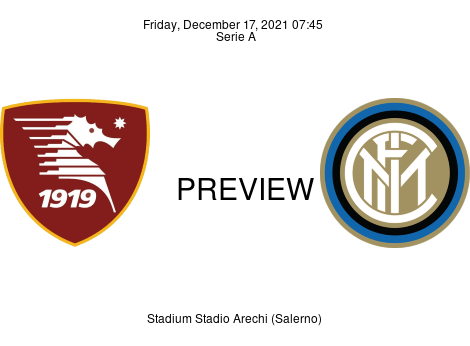 Having suffered a 4-0 defeat to the Lilies last weekend, the Garnets return for this early-weekend fixture against the Well-Cherished One. U.S. Salernitana 1919 vs. Inter Milan kicks off at 20:45 (GMT+1) on Friday, December 17, at the Arechi Stadium.

Preview Salernitana had no answer to the questions posed by the Purples in the four-goal thrashing that took place at the Stadio Artemio Franchi last Saturday. A magnificent outside of the right boot curler from Bonaventura (31') left Salernitana with a one-goal deficit a minute after half an hour. A left-footed shot from Vlahovic (51', 84') saw him double Fiorentina’s advantage before returning minutes later for the brace. Unable to mount any form of resistance to the onslaught, the Garnets conceded once more after Youssef Maleh (90') struck for Fiorentina’s fourth in the final minute. The defeat leaves Salernitana with three losses in a row, LDLLL, and at the bottom of the Serie A table. The Garnets have 8 points after 2W, 2D, and 13L, and manager, Stefano Colantuono, could be staring another defeat in the face, knowing his side needs nothing short of a miracle to defeat the Scudetto champions in this contest of David vs. Goliath. On Tuesday, his side picked up another defeat, 1-0, to Shevchenko’s Genoa in the Coppa Italia. Set for a return on Saturday, a 3—5—2 formation with Milan Đurić and Edoardo Vergani in attack is expected from Stefano Colantuono, as he aims for a famous upset in this fixture against Inter Milan.

Preview Having swept Cagliari aside with relative ease after a haul of four goals, Inter Milan moved to the top of the Serie A table last weekend. A brace from Lautaro Martínez (29’ & 68’), coupled with goals from Alexis Sanchez (50’) and Hakan Çalhanoğlu (66') saw Inter pick up a comfortable 4-0 win over the Sardinians. Inter returns with 40 points from 12W, 4D, & 1L, having five straight victories: WWWWW. The Scudetto champions have a narrow lead over the chasing pack, one point over 2nd-placed AC Milan [39 points] and three points over 3rd-placed Atalanta [37 points]. AC Milan faces 4th-placed Napoli [36 points] on Sunday, and Inzaghi will be hoping for a favorable outcome, in the shape of a draw, to keep his team three points ahead of the nearest rival, should this fixture against Salernitana turn out to be a victory. However, an unlikely defeat would leave Inter in second place at the very least. Simone Inzaghi’s 3—5—2 formation against the Sardinians saw Lautaro Martinez and Alexis Sánchez form the attacking duo, with the Bosnian Diamond Edin Džeko sitting it out. After the bag of four against Cagliari, Inzaghi could be sticking with the same personnel upfront. In other related news, Christian Eriksen and Inter Milan are set to have the former’s contract mutually terminated in the coming days.