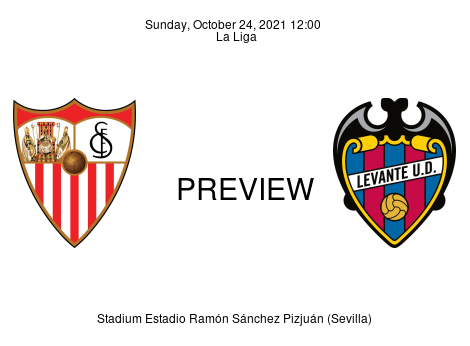 Preview Sevilla will be making the return to LaLiga after the goalless draw against Lille in Wednesday’s UEFA Champions League Group G fixture. Despite having a host of clear-cut chances, they were unable to find a way through against the French champions. All the important numbers were in Sevilla’s name. The club had 6 shots on target after 13 attempts, stemming from 615 passes and a total ball possession of 62%. Focusing back on the home front, Sevilla picked up a 1-0 win over Celta Vigo last weekend. A single strike from Rafa Mir (54’) early in the second half was enough to hand Sevilla the win at the final whistle. The victory saw Sevilla move one spot higher, from 4th to 3rd place on the Spanish LaLiga table. Following the win, the club has 17 points after 5W, 2D & 1L. With a game in hand, Sevilla has three victories in five games, DWWLW. Julen Lopetegui will fancy another victory on Sunday, against bottom-placed Levante. In the goalless draw against Lille, the 55-year-old lined up the 4—2—3—1 formation, leaving Rafa Mir in attack. A similar formation is expected on Sunday, with the trio consisting of Ocampos, Óliver Torres, and Suso providing the support behind the 24-year-old, who has three goals this season. Rafa Mir is the club's top scorer, alongside Erik Lamela and Youssef En-Nesyri, who also have three goals apiece for Sevilla this season.

Preview Well-rested, having played no part at the midweek European continental football efforts, Levante makes the return to LaLiga action following the goalless draw against Getafe. Levante were unable to find a way beyond Getafe despite having the important figures slightly in their favor. The club had 53% of the ball and made 459 passes. However, they fell short when compared with Getafe’s numbers in the final third, - having only two shots on target in six attempts. The club has no victories in five games: DLLLD, and sits in the red zone alongside Alaves and Getafe with 5 points after 0W, 5D & 4L. Levante has scored six goals so far this season, but conceded 13 times, leaving the club with a goal differential of -7. A 4—1—4—1 formation is expected from Javier Pereira, with Dani Gomez in attack on Sunday when Levante makes their 10th La Liga appearance of the season. Roberto Soldado is ruled out of this fixture against Sevilla following a hamstring injury.