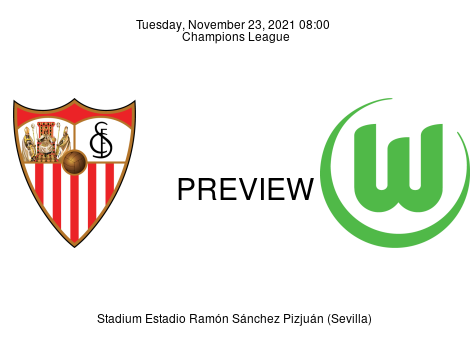 Following their 1-1 draw on UEFA Champions League Matchday 2, Sevilla F.C. will face VfL Wolfsburg once more. The game is scheduled to begin at 21:00 (GMT+1) on Tuesday, November 23, at the Ramón Sánchez Pizjuán, with referee Cüneyt Çakır (TUR) in charge for 90 minutes plus extra time. Meanwhile, the video assistant referee, Pol van Boekel (NED), will be at the monitors.

Preview Sevilla will return for this UEFA Champions League fixture after the 2-2 draw against Deportivo Alaves at the weekend. Currently sitting in 3rd place in the LaLiga table, the club has one defeat in five games across all competitions: DWLWD. On UCL Matchday 4, Sevilla picked up a 2-1 defeat to Lille on home soil, leaving them with three points in Group G after 0W, 3D, & 1L. Julen Lopetegui will aim for nothing less than three points on Tuesday, knowing Sevilla will be unable to finish in the top two if they pick up a defeat. However, qualification for the UEFA Europa League may remain possible if other favorable outcomes emerge over the remaining fixtures. A familiar 4—2—3—1 formation with the Rafa Mir in attack is expected. Erik Lamela and Ocampos could form part of the attacking trio behind Mir on Tuesday. Suso is ruled out with a hamstring injury along with Youssef En-Nesyri (muscle injury) and Jesus Navas. If booked, Delaney and Diego Carlos will miss the next match.

Preview Wolfsburg picked up a hard-fought 2-2 draw against Arminia Bielefeld in the German Bundesliga over the weekend and remained without a win in their last two games across all competitions: WWWLD. Despite having a two-goal deficit inside the hour, Wolfsburg put up a spirited fight to salvage a point against Bielefeld, thanks to goals from Wout Weghorst (62’) and Lukas Nmecha (63’). Following the 2-1 win over Salzburg on UCL Matchday 4, the German outfit sits in third place with five points, on par in terms of points with second-placed Lille in Group G after 1W, 2D, & 1L. The club remains in a delicate balance, with a top-two finish looking likely and an exit from the qualifying spot also possible depending on the outcome of events on UCL MD5 and 6. A 3—4—2—1 formation with Wout Weghorst leading the attack ahead of the midfield duo is anticipated for Tuesday. On availability, left-back Paulo Otávio remains ruled out for this fixture, having suffered an ankle injury alongside Xaver Schlager. Bartosz Bialek will also be unavailable, along with William. If booked, Lacroix, Mbabu, Nmecha, and Weghorst will miss the next game.