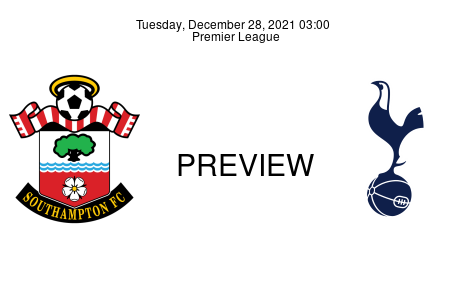 Having picked up an impressive 3-2 win over the Hammers, the Saints are back in for another round of Premier League action, this time against Spurs, hoping to pick up three more points. Southampton FC vs. Tottenham Hotspur kicks off at 16:00 (GMT+1) on Tuesday, December 28, at the St. Mary’s Stadium.

Preview With a remarkable 18-yard strike, Mohamed Elyounoussi (8') put Southampton in front inside the first ten minutes. But West Ham came calling on two occasions, forcing a fine save from the goalkeeper, Fraser Forster, on the latter. Both sides left the pitch with the Saints in front. But four minutes after the break, Michail Antonio (49') found the leveler and restored parity at the London Stadium. Minutes later, James Ward-Prowse (61' P.) restored Southampton’s lead from the spot, before a fine volley at the other end from Benrahma (64') left thousands wondering which direction the topsy-turvy game would swing next. Six minutes after the leveler, Bednarek (70') got on the end of a set-piece to see Southampton grab the lead for a third time at the London Stadium. It was the Saints’ first win in five Premier League games, DDLDW, and it saw the club move one spot higher on the table, from 15th to 14th place, having picked up 20 points after 4W, 8D, and 6L. Ralph Hasenhüttl switched from the popular 4—4—2 formation that had been well known to observers throughout the length of the season to a 4—1—4—1 formation. And with three precious points against West Ham, the 54-year-old Austrian is expected to stick with the same shape, leaving Armando Broja at the top for Tuesday’s game against Spurs.

Preview Having swept ten men Crystal Palace aside with relative ease, following the Boxing Day 3-0 win, Tottenham Hotspur jumped into the top-five, moving two spots across the table from 7th to 5th place. With the win, Spurs have 29 points from 9W, 2D, & 5L, and remain unbeaten in five Premier League games: WWWDW. We have strikers who are very good at receiving the ball and then creating something important to make an assist. Conte said in his post-match interview, probably speaking about Man-of-the-Match, Lucas Moura, who bagged a brace of assists against the Eagles. But at the same time, we also have strikers who are good when they have space in front to attack, the Tottenham boss added. Antonio Conte will see no reason to change the 3—4—2—1 formation after the haul of three against Palace. The trio, consisting of Kane (32’), Lucas Moura (34'), and Son (74'), all hit the back of the net on Boxing Day and are expected to be in attack once again on Tuesday.