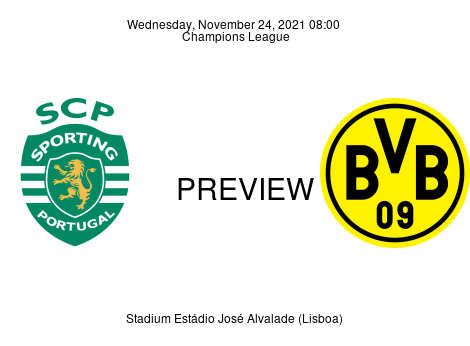 The UEFA Champions League fixture, Sporting CP vs. Borussia Dortmund, kicks off at 21:00 (GMT+1) on Wednesday, November 24, at the Estádio José Alvalade. Referee Carlos del Cerro Grande (ESP) will be in charge for this game, while Juan Martínez Munuera (ESP) will be in the VAR room.

Preview Sporting CP are off the back of a 2-1 win over Varzim S.C., which they picked up in the 4th round of the Taça de Portugal last Thursday. On UCL Matchday 4, the Portuguese outfit bagged an impressive 4-0 win over Beşiktaş on home soil. The comfortable win sits Sporting in 3rd place in Group C, leaving the club with equal points with Dortmund, 6, after 2W, 0D, & 2L. Manager Rúben Amorim will attempt to seize another window of opportunity on Wednesday and pick up three points against Dortmund for the prize of a second-place finish. If Sporting wins by two goals or more, the Portuguese champions will advance to the next round, and if they lose on Wednesday, they will be assured of a third-place finish and qualification for the UEFA Europa League. Amorim is expected to utilize the attacking 3—4—2—1 formation with Paulinho in attack for this fixture against Dortmund. The reverse fixture ended in a 1-0 defeat to the German side when both clubs met on UCL MD2. Pedro Porro is ruled out for this fixture, while Zouhair Feddal will miss the next match if he is booked on UCL MD5.

Preview Borussia Dortmund will be coming off the back of a 2-1 win over VfB Stuttgart on the home front in Germany. The victory saw BVB set a new club record by making it seven home league victories from seven games this season. On UCL MD4, the Bundesliga outfit picked up a 3-1 defeat to Group C leaders Ajax. With 6 points from 2W, 0D, & 2L, the Black and Yellows who have three victories in five games across all competitions, WWLLW, will go through to the next round if they defeat Sporting. Marco Rose could use the 4—3—3 or 4—2—3—1 formation with Steffen Tigges serving as the focal point of the attack. Mats Hummels (R. 29’) picked up a red card in the games against Ajax and will play no part in this fixture, while Giovanni Reyna and Nico Schulz are in doubt. Erling Haaland failed to feature in the 2-1 win over Stuttgart at the weekend, having been sidelined with a hip injury. Meanwhile, Mateu Morey, who has been left out of Dortmund's UEFA Champions League squad, is facing a long spell on the sidelines having suffered a knee injury earlier in the year on May 1.