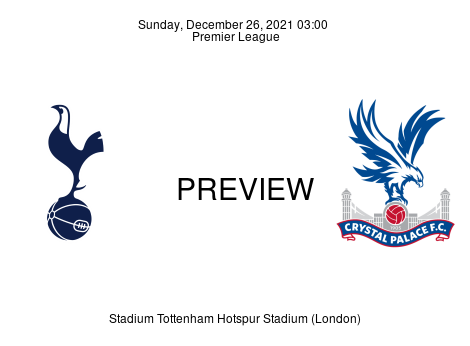 After the 2-1 win over West Ham in the EFL Cup quarter-final, Spurs are back in the Premier League to take on the Eagles in this Boxing Day London derby. Tottenham Hotspur vs. Crystal Palace kicks off at 16:00 (GMT+1) on Sunday, December 26, at the Tottenham Hotspur Stadium.

Preview Spurs picked up a 2-2 draw on home soil in the four-goal thriller against Liverpool last Sunday. It was Liverpool who started on the front foot, but the Reds failed to find the mark. Minutes after the red wave of attack, a through pass from Ndombele sliced through the Liverpool defense and found its way to Harry Kane (13’) for the opener. Spurs would have made it two, but Dele Alli failed to convert another clear-cut chance. Minutes later, a remarkable header from Diogo Jota (35’) restored parity at the Tottenham Hotspur Stadium. Andrew Robertson (69’) put Liverpool in front, minutes before he got sent off for a clumsy challenge. Before the red, Son (74’) had the ball tucked away for the leveler. The draw leaves Spurs unbeaten in five Premier League games: DWWWD. However, they remain in 7th place, having picked up 26 points from 8W, 2D, and 5L. Conte hopes to extend the white patch of his unbeaten run over the Eagles on Sunday. The 3—4—2—1 formation with Kane in attack is expected from Antonio Conte for this fixture. If Harry Kane scores on Sunday, he will match Robbie Fowler’s Premier League record of nine (9) Boxing Day goals. The 28-year-old has scored in all five of his Boxing Day Premier League appearances, a record high in the history of the competition.

Preview Crystal Palace had their fixture against Watford postponed due to the outbreak of COVID-19 at the club and now return behind the 2-2 draw against Southampton. The Eagles are in 11th place on the Premier League table, having picked up 20 points from 4W, 8D, & 5L. Patrick Vieira’s side have picked up just 4 points out of a possible 15 in the last five Premier League games: LLLWD, ahead of this fixture against Tottenham. Despite the patchy form, running away with a point appears to be a possibility for Palace, who have hit the back of the net a total of seven (7) times in three consecutive Premier League London derbies. An advocate of the attacking 4—3—3 formation, Patrick Vieira’s attacking trio could consist of Odsonne Édouard, Ayew, and Wilfried Zaha, once again. The famous trio have a total of 9 goals shared among them in the Premier League, with Zaha having the Lion’s share of 5 goals.