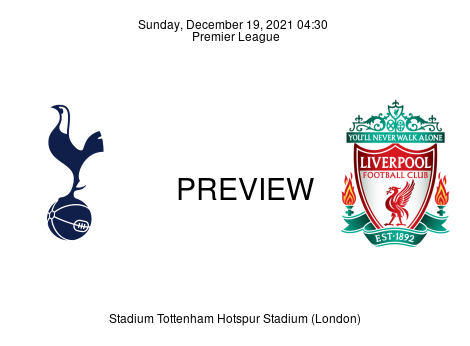 With the mid-week game against Leicester City postponed, Spurs return for this weekend's fixture against the Reds, hoping to pick up three unlikely points. The Premier League fixture, Tottenham Hotspur vs. Liverpool FC, kicks off at 17:30 (GMT+1) on Sunday, December 19, at the Tottenham Hotspur Stadium.

Preview Due to a COVID outbreak at Leicester City, Tottenham Hotspur were unable to take part in the midweek round of fixtures. The club is now facing mounting fixture congestion after a third consecutive postponement. An initial request to have the game postponed was swept aside until Thursday after several more cases of COVID-19 were revealed. Leicester City can confirm that the Premier League Board has decided to postpone Thursday night's fixture against Tottenham Hotspur, a club statement said. Match-rusty, Spurs are now back to face red-hot Liverpool. Tottenham will be returning with three consecutive victories: LDWWW. Luckily, the club remains in 7th place, having 25 points from 8W, 1D, and 5L. Antonio Conte could be lining up with the 4—2—3—1 formation, leaving the misfiring Harry Kane in front once again. Spurs will be missing as many as six players due to COVID-19, with Lucas Moura and Heung-Min Son included.

Preview Liverpool remained in second place after the 3-1 win over Newcastle United in the midweek round of fixtures. A well-executed counterattack saw Jonjo Shelvey (7’) put Newcastle in front, having bagged the opener with a fabulous 20-yard strike. Minutes later, Diogo Jota (21’) found the equalizer under controversial circumstances. Newcastle's Isaac had gone down to the ground in the box, clutching his head, but Liverpool chose to go on playing. Moments later, a loose back-pass left Sadio Mane with a golden opportunity to find the net. But it was Salah (25') who converted after the rebound. Trent Alexander-Arnold put some more space between both sides with a 25-yard-stunner, which saw the referee, Mike Dean, scampering for safety as the ball homed in on target. Liverpool has 37 points from 11W, 4D, & 1L, and will be returning with five straight victories: WWWWW, ahead of this fixture against Tottenham. Klopp is of the opinion that a break in the Premier League would not help. I didn't see the benefit of stopping, the Liverpool manager said. Stopping the league is probably not the right thing, but with the schedule, we have to be more flexible, he added. His statement comes in the wake of seeing five weekend fixtures postponed, coupled with the likes of Bees boss, Thomas Frank, calling for the postponement of all weekend fixtures. Jurgen Klopp’s 4—3—3 formation will see Salah, Diogo Jota, and Mane in attack once again.