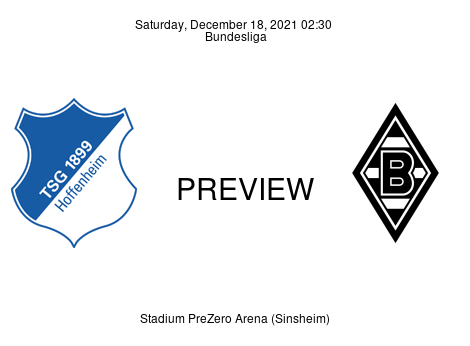 The Bundesliga fixture, TSG 1899 Hoffenheim vs. Borussia Monchengladbach, kicks off at 15:30 (GMT+1) on Saturday, December 18, at the PreZero Arena.

Preview Hoffenheim picked up a point in the 2-2 draw against Bayer Leverkusen on Wednesday at BayArena with a restricted number of fans, 13,000 of them in attendance. A well-executed counter-attack from Bayer Leverkusen saw Patrik Schick (37') tuck the ball away with a fabulous left-footed half-volley. After the break, the 25-year-old Schick (63’) returned for the brace with a thumping header, leaving Hoffenheim with a double to deal with. A remarkable effort from a narrow-angle saw Angelo Stiller (80') squeeze the ball into the back of the net to restore Hoffenheim back into the game with ten minutes left on the clock. Three minutes later, a reverse flick-on from Mu'nas Dabbur (83') saw Hoffenheim restore parity at BayArena until the final moment. The draw leaves Hoffenheim unbeaten in five Bundesliga games: WWWWD, while holding on to 4th place, having picked up 27 points from 8W, 3D, & 5L. Hoffenheim have a goal ratio of 2.12 g.p.g. this season and are hoping it will count when they face Gladbach on Saturday. Die Kraichgauer have scored 34 goals in 16 Bundesliga games. In addition, the club has conceded 25 goals (1.56 goals conceded per game) and has a G.D. of +9. A 3—4—3 formation, with Mu'nas Dabbur at the focal point of attack, is expected from Sebastian Hoeneß against Borussia Monchengladbach on Saturday.

Preview In the midweek round of fixtures, Borussia Mönchengladbach threw away a one-goal lead and lost 3-2 to ten-man Eintracht Frankfurt. Goals from Florian Neuhaus (6') and Ramy Bensebaini (54' P.) weren't enough to see Gladbach earn a point at home, having let in a haul of three at Borussia-Park on Wednesday. The defeat leaves Borussia Monchengladbach in 13th place on the Bundesliga table, having picked up 18 points from 5W, 3D, & 8L. Following the loss, the Colts will be making their return with four straight defeats, WLLLL, in their last five Bundesliga games. Focusing on Gladbach’s numbers. The club has 21 goals after 16 Bundesliga games, with a goal ratio of 1.31 goals scored per game. Die Fohlen have conceded 31 goals (1.94 goals per match) so far this season and have a G.D. of -10. Having lost to his former side earlier in the week, Adi Hütter returns, under significant pressure, aiming to turn things around with the Colts. A 3—4—2—1 formation with Breel Embolo in attack is expected for this game against Hoffenheim. Nico Elvedi (Gastrointestinal) remains doubtful, along with Jonas Hofmann (knee injury).