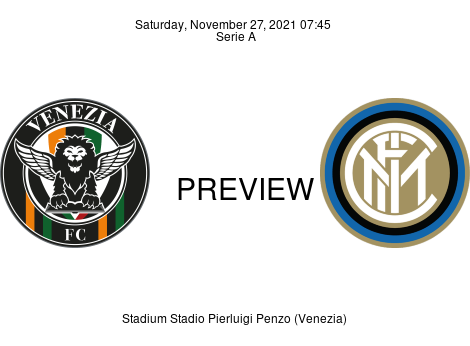 Preview With 15,000 spectators at the venue, Venezia picked up a 1-0 win over Bologna at the Stadio Renato Dall’Ara. The Nigerian, David Okereke (61'), bagged the only goal of the game, one minute after the hour mark, leaving the Winged Lions with back-to-back victories after five games: LLDWW. The win also saw the club move one spot ahead, from 15th to 14th place, having picked up 15 points after 4W, 3D, & 6L. On the numbers, Venezia has a goal ratio of 0.92 g.p.g. this season, having scored 12 goals in 13 Serie A games. They have also conceded 19 goals and have a G.D. of -7. An average of 1.46 goals conceded per game. A 4—3—3 formation with the 24-year-old Nigerian, Okereke, at the focal point of the attack is expected from Paolo Zanetti against Inter on Saturday. Okereke is joint top-scorer with Mattia Aramu, both having a haul of four goals each. Before David Okereke, the last Venezia player of non-Italian nationality to score at least four goals in his first 12 Serie A appearances for the club was Alvaro Recoba in 1999.

Preview Inter Milan picked up a 2-0 win over Shakhtar Donetsk on Wednesday, UEFA Champions League Matchday 5. A brace from the Bosnian Diamond, Edin Džeko (61’ & 67'), settled the duel of ninety minutes on European soil. Back on the home front, the Italian champions put a stop to Napoli’s season-long unbeaten run with a 3-2 win over the Partenopei in a five-goal thriller on Matchday 13. Zielinski (17') fired Napoli in front, but a wayward arm from Koulibaly gave a penalty away and saw Inter’s Hakan Calhanoglu (25' P.) restore parity from twelve yards. Minutes later, Ivan Perisic (44') put Inter in the lead with a difficult glancing header from a narrow angle. Lautaro Martinez (61') struck for Inter’s third goal before a remarkable 25-yard-stunner from Dries Mertens (78') cut Inter’s lead down to one. After defeating Napoli, third-placed Inter reduced their deficit to the top two to just four points, with AC Milan also losing to Fiorentina on MD 13. Inter has 28 points from 8W, 4D, & 1L and remains unbeaten in five games, DWWDW, ahead of this fixture against Venezia. Simone Inzaghi’s 3—5—2 formation could see Joaquin Correa return to the starting line-up, having started from the bench in preference of Edin Džeko for the game against Donetsk. However, with the brace on UCL Matchday 5 [Džeko], either of the two could be playing alongside Lautaro Martinez on Saturday. A plague of hamstring injuries keeps Alexis Sanchez (hamstring) and Stefan de Vrij out of the squad.