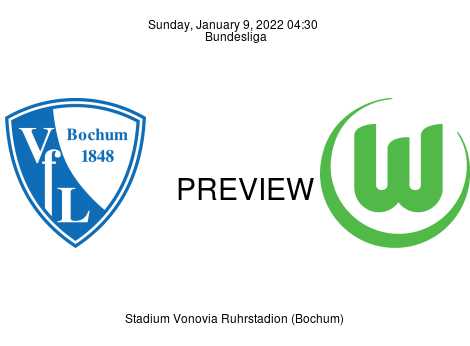 The lower-bottom-half Bundesliga clash between VfL Bochum 1848 and VfL Wolfsburg kicks off at 17:30 (GMT+1) on Sunday, January 9, at Vonovia Ruhrstadion.

Preview Following the narrow 1-0 defeat to FC Union Berlin on home soil, Bochum failed to earn a point in their last game of the 2021 calendar year. A single strike from Max Kruse (16') inside the first twenty minutes eventually separated both sides at the Vonovia Ruhrstadion, leaving Bochum with back-to-back defeats: WWDLL. The loss leaves the club without any progress on the Bundesliga table, as they remained in 12th place with 20 points from 6W, 2D, and 9L. Tied on points but separated by goal difference, Bochum sits right above 13th-placed Wolfsburg in the Bundesliga table. Thomas Reis aims to put some distance between his side and the Wolves on Sunday with a win over Wolfsburg. A look at the numbers leaves Bochum with a goal ratio of 0.94 g.p.g. this season, having scored 16 goals in 17 Bundesliga games. Die Unabsteigbaren have conceded 26 goals (an average of 1.53 goals conceded per game) and have a G.D. of -10. A 4—3—3 formation with Asano, Polter, and Holtmann is expected in attack for this fixture against Wolfsburg. Gerrit Holtmann recently won the Bundesliga Goal of the Year award [2021] for his sensational solo effort against FSV Mainz on Matchday 2. On availability, Decarli is ruled out, along with Stafylidis and Masovic (suspended).

Preview Wolfsburg will be returning with five straight Bundesliga defeats: LLLLL, following the 4-0 loss to Bayern Munich before the break. Minutes into the game, Serge Gnabry forced a save out of Koen Casteels, but Thomas Müller (7') was lurking for the rebound. Twelve minutes after the break, Müller picked out Upamecano (57') for Bayern’s second, before a fabulous left-footed curling shot from Leroy Sane (59') left Wolfsburg knee-deep in the mud. Robert Lewandowski (87') eventually wrapped up the three points for Bayern, leaving Florian Kohfeldt with his 7th loss at the helm after 11 games: 3W, 1D, and 7L. Kohfeldt’s 27% win rate is slightly less than Mark van Bommel’s 30%, although Kohfeldt remains two games shy of the mark before van Bommel (13G: 4W, 3D, & 6L) was dismissed. Judging by the numbers, Kohfeldt should have one foot pointed at the exit door, having failed to make any form of considerable progress when compared to his predecessor. The defeat saw Wolfsburg drop further down the table, as they moved from 11th to 13th place, having 20 points from 6W, 2D, and 9L. A 4—3—3 formation with Waldschmidt, Weghorst, and Steffen in attack is expected for this fixture against Bochum. Lukebakio (COVID-19) will not make this trip, while Lukas Nmecha (ankle) is also ruled out.