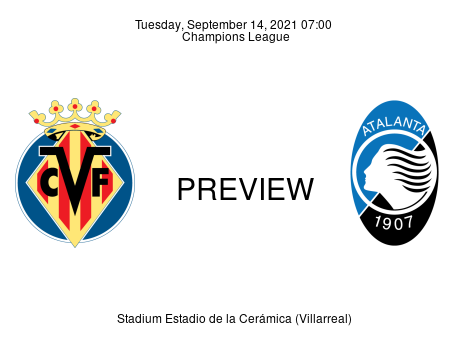 The UEFA Champions League Group F fixture, Villarreal C.F. vs. Atalanta B.C. kicks off at 20:00 (GMT+1) on Tuesday, September 14 at El Madrigal. Clément Turpin, from France, will be the man in the middle for this game, while Nicolas Danos (FRA) and Cyril Gringore (FRA) will be assisting.

Preview Having had their weekend La Liga fixture against Deportivo Alaves postponed, Villarreal will make their entry into this contest of champions after last Friday’s club-friendly match against S.C. Braga. The game finished in a 3-2 defeat for Villarreal. Pending the outcome of their outstanding La Liga fixture, Villarreal are in 11th place on the domestic league table, having failed to pick up a single victory in three games: DDD. The Yellow Submarine have also failed to pick up a victory in their last five games across all competitions: LDDDL. However, coach Unai Emery, who guided Villarreal to victory in the Europa League last season, hopes to start Villarreal’s UEFA Champions League campaign on a brighter note. The Yellow Submarine share Group F with Manchester United, BSC Young Boys, and of course, the Italian side, Atalanta. A 4—4—2 formation could be seen on Tuesday, with Dia and Gerard Moreno featuring in the two-pronged attack. With the exception of the Nigerian, Samuel Chukwueze, who remains in doubt for this fixture having suffered a hamstring injury, Villarreal will have a fully fit squad ahead of this Tuesday’s UEFA Champions League opener. The club will take on Manchester United at the Theatre of Dreams on Sept. 29, UEFA Champions League Matchday 2.

Preview Atalanta aren't faring much better either. Following Saturday’s 2-1 defeat to Fiorentina in Serie A, Atalanta remain in 10th place on the domestic league table. The Italian side have failed to find their form in front of goal, scoring only three times in three appearances in the league. Atalanta will make their 3rd consecutive appearance in the UEFA Champions League, having qualified for the first time in the 2019/2020 season. In their first season in the tournament, the club advanced to the quarter-finals. The club also advanced into the knockout round last season but lost to another Spanish opposition in the shape of Real Madrid in the last 16. Having picked up only two victories in the last five games across all competitions: DWLWD, Gian Piero Gasperini will hope for a win on Tuesday to get the UEFA Champions campaign off to a fine start. A 3—4—3 formation with Duvan Zapata at the top of the shape is expected against Villarreal on Tuesday. On availability, Luis Muriel remains in doubt for this fixture. Atalanta will take on BSC Young Boys at the Atleti Azzurri d'Italia on UEFA Champions League Matchday 2.