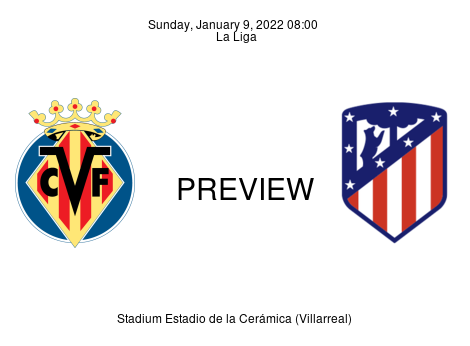 Preview After an exit from the Copa del Rey following the 2-1 defeat to Sporting Gijón, Villarreal aims to put the disappointment behind them with a win against Atletico Madrid on Sunday. Last Monday, five-star Villarreal picked up a 5-0 win over Levante on home soil. A brace from Gerard Moreno (37’ & 79’), coupled with goals from Boulaye Dia (8’), Pau Torres (13’), and Manu Trigueros (74'), were enough to settle the one-sided contest at El Madrigal. The huge victory comes after another haul of five, in the shape of a 5-2 win over Deportivo Alavés, which also saw Gerard Moreno (18' & 88') bag a brace. Villarreal has the La Liga form: LWWWW, in 8th place, having picked up 28 points after 7W, 7D, and 5L. On the numbers, the Yellow Submarine has a goal ratio of 1.63 g.p.g. this season, with 31 goals in 19 La Liga games. They have also conceded 20 goals (an average of 1.05 goals conceded per game), and have a G.D. of +11. At Sporting Gijón, Unai Emery mirrored the opposition's 4—2—3—1 formation, but a switch to the conventional 4—4—2 is expected for this fixture against ATM. Gerard Moreno and Arnaut Danjuma could rekindle their striking partnership once again. On availability, Villarreal will be without Boulaye Dia, Aissa Mandi, and Nigeria's Samuel Chukwueze, having all departed for the African Cup of Nations in Cameroon.

Preview Last Sunday, Atlético Madrid picked up a 2-0 win over Rayo Vallecano at the Estadio Wanda Metropolitano. The win leaves Atletico Madrid in 4th place on the La Liga table, with 32 points after 9W, 5D, and 5L, following their first victory after four straight defeats: LLLLW. Unlike the Yellow Submarine, ATM picked up a 5-0 win over CF Rayo Majadahonda in Thursday’s Copa del Rey fixture on home soil. Having recently returned to winning ways, Diego Simeone aims for back-to-back league victories. The Mattress Makers have 31 goals after 19 La Liga games, - a goal ratio of 1.63 goals scored per game. In addition, Los Indios have conceded 22 goals (an average of 1.16 goals conceded per match) so far this season and have a G.D. of +9. Diego Simeone could appear with the 4—4—2 formation, leaving Ángel Correa and Antoine Griezmann in attack. Luis Suarez is suspended and will not feature in this weekend’s fixture, while Stefan Savic remains doubtful.