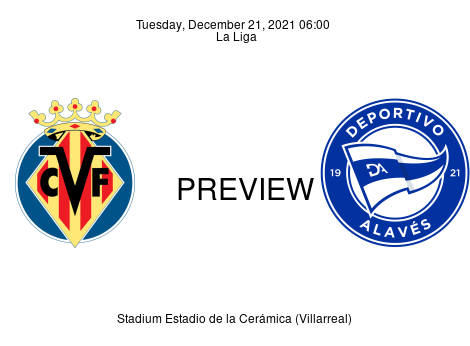 The Spanish LaLiga match between Villarreal CF and Deportivo Alavés begins at 19:00 (GMT+1) on Tuesday, December 21, at El Madrigal.

Preview At Reale Arena, Villarreal picked up a comfortable 3-1 win over ten-man Real Sociedad over the weekend. A remarkable goal from Sociedad’s Alexander Isak (32’) divided both sides two minutes after half an hour. But the lead didn’t last long as Gerard Moreno (38’) headed the Yellow Submarine back on level terms. Minutes after the break, Mikel Oyarzabal (R. 49’) was given the marching orders after a malicious foul on Yéremy Pino. With the numerical advantage, Villarreal pressed for a second goal and found one. Gerard Moreno (68’) returned for the brace, before the Nigerian, Samuel Chukwueze (90+6’), wrapped up all three points at the Reale Arena. In the second half, we had chances and we scored from a set-piece again, Unai Emery said in his post-match interview. We gave them the ball too easily, and it was important to score the third to kill off the game. At the end, we did so with the last piece of action of the game, Unai added. The victory saw the Yellow Submarine move one spot higher, from 13th to 12th place on the LaLiga table, having amassed 22 points from 5W, 7D, & 5L. Villarreal will be returning with back-to-back victories, DLLWW, ahead of this fixture against Deportivo Alavés. A 4—4—2 formation with Boulaye Dia and Gerard Moreno in attack is expected on Tuesday against Deportivo Alavés.

Preview Alavés left the Estadio de Vallecas empty-handed after losing 2-0 to Rayo Vallecano on Saturday. Goals from Sergio Guardiola Navarro (19’) and Alejandro Catena Marugán (26’) in the first forty-five were enough to settle the duel of ninety minutes. Despite taking 6 shots, 4 O.T., Alaves were unable to convert any of their chances. The defeat saw the club remain in the murky waters of relegation, in 18th place, despite having equal points (15 points) as 17th-placed Elche and 16th-placed Getafe. Alaves have picked up 4W, 3D, and 10L this season, and will be returning without a victory in five games: DLLDL. Javier Calleja is in desperate need of a win to rescue his side from imminent relegation. However, he could settle for a point, knowing a victory over Villarreal could be too much to ask for, considering his side's patchy form. For the game against Vallecano, he adopted a 4—1—4—1 formation, leaving Joselu at the top of the shape. A similar design with the 31-year-old, who has eight goals for the club this season, is expected on Tuesday.