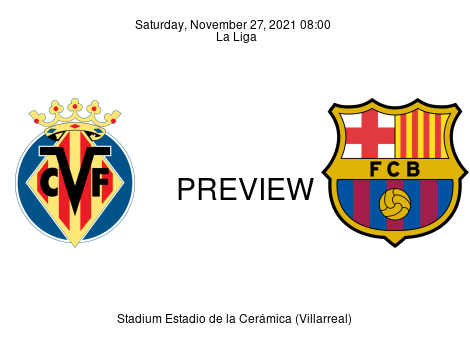 The Spanish LaLiga returns after the midweek round of European fixtures, with the highly anticipated match, Villarreal vs. Barcelona, slated for kickoff at 21:00 (GMT+1) on Saturday, November 27, at Estadio de la Cerámica. Taking a deep dive into the numbers ahead of LaLiga Matchday 15. Karim Benzema failed to hit the back of the net in Madrid’s 4-1 win against ten-man Granada but remains the league’s top scorer with a haul of 10 goals to his name. The Madrid forward also sits at the top of the assists list with 7, alongside Rayo Vallecano’s Óscar Trejo. Real Sociedad’s goalkeeper, Álex Remiro, has the highest number of clean sheets, 8, while Los Blancos maintain a narrow one-point lead at the top of the table ahead of second-placed Real Sociedad. Meanwhile, Levante sits at the bottom.

Preview The Yellow Submarine picked up a 2-0 defeat to Manchester United on Tuesday, UEFA Matchday 5 at El Madrigal. Villarreal had held on to the stalemate until Cristiano Ronaldo (78’) struck for the late opener. Right at the death, Jadon Sancho (90’) extended United’s lead with the second, leaving Villarreal in second place in UCL Group F with 7 points. Back on the home front, the club picked up a 1-1 draw against Celta Vigo at the Balaídos last weekend. Villarreal have only one victory in five games: LDLWD, and are in 12th place, having picked up 16 points after 3W, 7D, & 3L. On the numbers, Villarreal have a goal ratio of 1.2 g.p.g. this season, having scored 15 goals in 13 La Liga games. They have also conceded 13 goals (1 g.c.p.g.) and have a goal difference of +2. A 4—4—2 formation, with Manu Trigueros and Arnaut Danjuma in attack, is expected for this game against Barcelona. Gerard Moreno’s availability remains in doubt for this fixture.

Preview Xavi’s Barcelona picked up a goalless draw against Benfica on Tuesday, UCL Matchday 5, leaving qualification for a last-16 berth from Group E in a delicate balance and down to the wire on UCL MD6. We were far superior to Benfica and we played a great game, Xavi said after the match. If we had scored, we would be talking about a great game. We're Barca, we have talent and players to make a difference. A braggadocious Xavi added. Back on the domestic front, Barcelona picked up a 1-0 win over Espanyol, with Depay (48' P.) scoring the only goal of the game from the penalty spot. Barcelona moved two spots ahead, from 9th to 7th place on the LaLiga table, after what was their first win in five games, LLDDW. The club has 20 points from 5W, 5D, & 3L. Xavi adopted a 3—4—3 formation against Benfica and could be doing the same for this game against Villarreal. Depay will be at the center of the attack once again. Barcelona has no new injury worries.