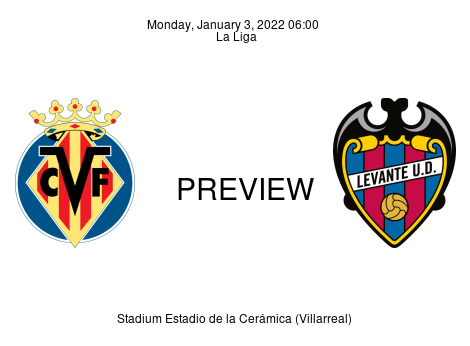 The Yellow Submarine make their way back to take on the Frogs for their first game of the new year following a comfortable win over El Glorioso on home soil in December 2021. Villarreal CF vs. UD Levante kicks off at 19:00 (GMT+1) on Monday, January 3, at Estadio de la Cerámica.

Preview Having swept Deportivo Alavés aside in a 5-2 win on LaLiga Matchday 18, Villarreal make their return behind three consecutive victories: LLWWW. A brace from the duo, Gerard Moreno (18', 88') and Boulaye Dia (27', 76'), coupled with a goal from Yéremy Pino (79'), was enough to decide the outcome of the game. - Despite goals from Alavés’ Pere Pons (44') and Joselu (65') at Estadio de la Cerámica. Villarreal is in 10th place, with 25 points from 6W, 7D, & 5L. Having struggled with consistency for a major portion of 2021, Unai Emery’s side will be looking to start the new year on a high and close the gap on the top-six. Villarreal trails the section by four points, and a win on Monday should see the Yellow Submarine sailing inside the clear waters of the top-ten. For the game against the Glorious One, Unai Emery adopted the 4—4—2 with the duo, Gerard Moreno and Boulaye Dia in attack. Having both found the back of the net on La Liga Match Day 18, a similar shape with the attacking duo is expected on Monday for this fixture against Levante.

Preview Navigating through the troubled waters of relegation, Levante remains without a win this season and will be returning with back-to-back defeats, DLDLL, following MD18’s loss to the Bats. Levante were two goals up inside the first thirty minutes after José Campaña (21’) and Roger Martí (24’) hit the back of the net, three minutes apart, midway through the first half. But the Portuguese, Gonçalo Guedes (44'), pulled one back for Valencia before Carlos Soler (50’ P.) restored parity from the penalty spot, five minutes after the interval. Both goal scorers picked up the brace for the Bats before Levante hit the back of the net for their third through Enis Bardhi (90’+1) inside stoppage time. The 4-3 loss leaves Levante at the very bottom of the LaLiga table in 20th place, with 8 points from 0W, 8D, & 10L. Caretaker manager Alessio Lisci aims for a change in fortunes in the new year, and a point in this difficult game against Villarreal would be a step in the right direction. A 4—4—2 formation with Roger Martí and Dani Gómez in attack is expected against Villarreal on Monday when both sides clash.