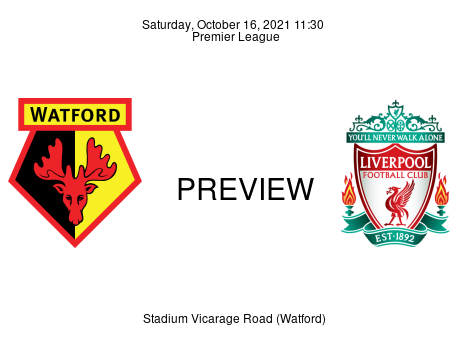 The English Premier League match between Watford F.C. and Liverpool F.C. will kick off at 12:30 (GMT+1) on Saturday, October 16, at Vicarage Road. Referee Jonathan Moss will be in charge while working alongside the assistants, Marc Perry and Timothy Wood. Stuart Attwell will be the VAR.

Preview Watford looks to start afresh with Claudio Ranieri following the dismissal of Xisco Muñoz after the 1-0 defeat to Leeds United on Matchday 7. A single strike from Diego Llorente (18’) was enough to see off the Spanish coach after 10 months in charge while managing a total of 36 games. Despite a 58%-win rate, his undoing came in the new season, which has seen Watford pick up only two victories after seven games: 2W, 1D, & 4L, leaving the Hornets in 15th place. Muñoz's reign at the helm (286 days) was the sixth-longest in the club's history, with the average being 265 days. Watford is a very good club for me. I wanted to come back to England and I'm very pleased, very happy, and want to do my best, Ranieri said right after his appointment. On Saturday, he would be thrown right into the deep end in an attempt to pick up a point against Liverpool. Watford comes with the form: LLWDL, and a draw against the Reds would signal a good start on his first day at the office for Ranieri. The Hornets have 7 points, with 7 goals after seven Premier League games. They have also conceded 10 goals (1.43 goals conceded per game), and have a G.D. of -3. With the recent acquisition of Nicolas N'koulou (formerly of Torino, as a free agent), Watford will have an experienced option at the back. The 31-year-old defender has more than 70 caps for Cameroon, assisting the country to a title-winning campaign at the African Cup of Nations in 2017. He will be given the number 13 shirt for the length of his contract with the Hornets and could make his debut for the club on Saturday alongside Claudio Ranieri. A 4—2—3—1 formation with Joshua King at the top of the design is expected against Liverpool.

Preview Second-placed Liverpool remains unbeaten this season 4W, 3D, & 0L with 15 points after seven games. Before the international break, the Reds picked up a 2-2 draw against Manchester City, their third draw in five games: DWWDD. The Reds have a haul of 17 goals (2.43 goals scored per game) after 7 Premier League games but conceded 6 goals (0.86 G.C.P.M) and have a G.D. of +11. Following the axe which saw Muñoz shown the exit, Liverpool can expect a motivated version of Watford. Jurgen Klopp’s 4—3—3 formation could see Salah, Mane, and Origi in attack on Saturday. Diogo Jota remains in doubt after picking up a minor muscle injury while on international duty. Fabinho and first-choice goalkeeper Alisson may be unavailable for this game due to international commitments. Meanwhile, Trent Alexander-Arnold rejoins the squad and will be available for selection on Saturday.