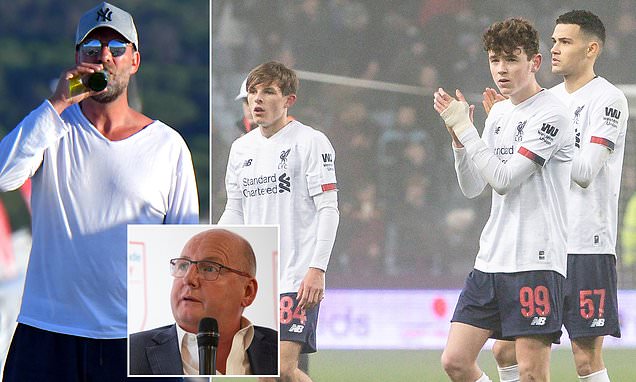 It's the second time in a week that Holt has taken issue with Klopp over the Reds' fourth-round replay with Shrewsbury after the German confirmed that he would not be attending the cup clash at Anfield.
Read More
DAILYMAIL.CO.UK

Accrington Stanley striker Billy Kee has retired from full-time professional football having taken time out due to his battles with mental health issues
Read More
DAILYSTAR.CO.UK The Liverpool manager has been heavily censured by Accrington Stanley chairman Andy Holt, who also said that his stance was 'pure selfishness'
Read More
GOAL.COM

Accrington Stanley’s owner, Andy Holt, has slammed Jurgen Klopp and called on the Football Association to take strong action against Liverpool if they field a youth team in their FA Cup replay with Shrewsbury. After the Reds were held 2-2 by the League One side in Sunday’s fourth round clash, Klopp declared he and his […]
Read More
TALKSPORT.COM

Reds boss Klopp confirmed he and his Liverpool first-team squad will not face Shrewsbury in the tie at Anfield to ensure they have a winter break following the 2-2 draw on Sunday.
Read More
DAILYMAIL.CO.UK

Stanley's Billy Kee was in attendance at Burton Albion

ACCRINGTON Stanley manager John Coleman was pleased to see his side stop the rot as they came away from Burton Albion's Pirelli Stadium with a 1-1 draw.
Read More
LANCASHIRETELEGRAPH.CO.UK

Ratings: How the Ipswich Town players performed in their classy 4-1 home victory over Accrington Stanley

Kayden Jackson, James Norwood, Alan Judge and Will Keane are on target as Ipswich Town get back to winning ways against Accrington Stanley

IPSWICH Town eased back to winning ways with a convincing and much-needed 4-1 victory at home to Accrington Stanley.
Read More
GAZETTE-NEWS.CO.UK

Joey Barton was disappointed that an agonising shoot-out defeat to Accrington Stanley in the Leasing.com Trophy ended Fleetwood’s cup interests for this season, but the Town boss was determined to take as many positives as possible from that northern quarter-final exit.
Read More
BLACKPOOLGAZETTE.CO.UK

Fleetwood Town missed out on a potential dream Wembley final after losing their Leasing.com Trophy northern quarter-final to Accrington Stanley 5-3 after penalties after a 2-2 draw.
Read More
BLACKPOOLGAZETTE.CO.UK

Explained: Another Wolves youngster is struggling out on loan

Sadou Diallo’s stint at Accrington Stanley has come to an end and won’t be remembered in a hurry. In September, the 20-year-old joined Stanley on a short-term loan until January 2020, but he spent the majority of his time on the bench or out of the matchday squad. In four months, Diallo made just four […]
Read More
VITALFOOTBALL.CO.UK

Live updates for Accrington Stanley's match in League One against Burton Albion at the Wham Stadium
Read More
LANCASHIRETELEGRAPH.CO.UK

ACCRINGTON Stanley are now nine points off the League One play-off places after embarking on a fine run of form during the busiest stage of the season.
Read More
LANCASHIRETELEGRAPH.CO.UK