The table-topping Canaries entertain the Owls in the Championship tomorrow afternoon and will be looking to get back to winning ways after the midweek defeat to Luton Town
Read More
EXAMINERLIVE.CO.UK

The Swansea City boss has spoken about summer signing Jamal Lowe ahead of the Championship clash with Luton Town
Read More
WALESONLINE.CO.UK

The games are coming thick and fast for Swansea City, who will need to muster a response after a disappointing night on Teeside in midweek. The Swans were handed only their third defeat of the season by Neil Warnock's Middlesbrough, and were punished after turning in a somewhat off-colour performance. Steve Cooper will no doubt be demanding a bette[...]
Read More
WALESONLINE.CO.UK

Quiz: Which club did Luton Town sign each of these 25 players from?

Luton Town have enjoyed a strong start to the Championship season, and they currently sit just four points away from the play-offs. That continued what has been a remarkable rise for the Hatters in their recent history, with fans delighted at how they’ve progressed. Whilst there have been may factors behind Luton going from non-league [&helli[...]
Read More
FOOTBALLLEAGUEWORLD.CO.UK

Swansea host Luton Town at the Liberty Stadium in the latest round of Championship fixtures on Saturday afternoon. Steve Cooper’s men were beaten at Middlesbrough in midweek, and after the top four sides in the division failed to win, Swans squandered the opportunity to climb to the summit for the first time this season. However, […] T[...]
Read More
FOOTBALLLEAGUEWORLD.CO.UK

Since I last put fingers to the keyboard, some three days ago, courtesy of the ‘proper’ job, the Hatters churned out a remarkable win against top of the table Norwich City. Against the odds, as laid out by the bookmakers, Luton emerged 3-1 victors against a side who were playing in the Premier League last […] The post Luton Town [...]
Read More
VITALFOOTBALL.CO.UK

What Does The Month Of December Hold In Store For Luton Town?

In what is a regular feature, thanks to the ‘proper’ job we are running a little behind schedule this month. In summing up the month of November – when-it-came-to-november-perhaps-the-luton-town-support-were-a-little-optimistic – we promised we would do the same for this month. But if we thought November was a busy month the[...]
Read More
VITALFOOTBALL.CO.UK

Norwich City have complained to the EFL over referee Darren England following last night’s 3-1 loss at Luton Town. That’s according to the Pink Un, who claim that the Yellows feel they weren’t shown enough respect by the officials throughout the clash at Kenilworth Road. One particular talking point was the fact that Hatters midfi[...]
Read More
FOOTBALLLEAGUEWORLD.CO.UK Norwich City have complained to the EFL after Luton Town's Luke Berry came into contact with the referee after celebrating the award of a penalty in Wednesday's 3-1 victory for the Hatters.
Read More
SKYSPORTS.COM

‘Our best player by a distance’: Some fans applaud performance of their Spurs loanee

Championship leaders Norwich City suffered a surprise defeat away to Luton Town on Wednesday night – but some of their fans on Twitter did at least praise their Tottenham loanee Oliver Skipp for his individual performance. Norwich, who are currently top of the second-tier, were beaten 3-1 away to mid-table side Luton in front of […] Th[...]
Read More
TBRFOOTBALL.COM

It was a bad night for Norwich City on Wednesday, as they lost 3-1 to Luton Town at Kenilworth Road. In one of the first games to welcome back home fans, the hosts made a perfect start, as George Moncur out Luton ahead with just 15 minutes on the clock. Norwich levelled just moments later […] The post 'Such a good footballer' - These Norwich[...]
Read More
FOOTBALLLEAGUEWORLD.CO.UK 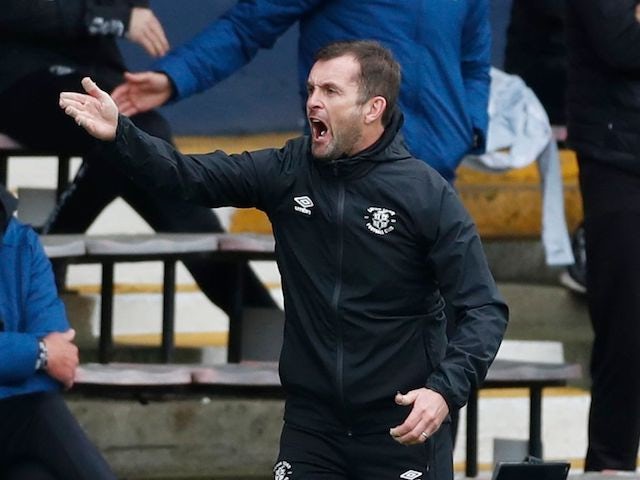 It was the first time supporters had been in Kenilworth Road since Nathan Jones returned as manager.
Read More
SPORTSMOLE.CO.UK

The Hatters ran out comfortable winners in front of 1,000 fans at Kenilworth Road.
Read More
SPORTSMOLE.CO.UK 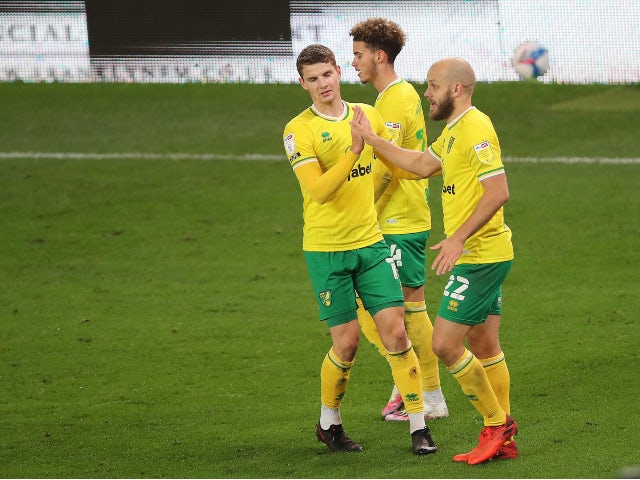 The Bluebirds welcome the Terriers to the Welsh capital this evening with the hosts hoping to build on their 4-0 hammering of Luton Town last weekend
Read More
WALESONLINE.CO.UK

David Prutton has tipped Cardiff City to beat Huddersfield Town when they meet in the Welsh capital on Tuesday night. Following a recent run of just one win in eight, Neil Harris’ Bluebirds picked up a welcome three points in emphatic fashion at the weekend, as they thrashed Luton Town 4-0. Huddersfield meanwhile, won a […] The post Sk[...]
Read More
FOOTBALLLEAGUEWORLD.CO.UK

We have played them in the top division and again when they have been in the Football Conference. Tomorrow night we look forward to a trip to one of the more old fashioned grounds in English football. It’s a short(ish) trip to Kenilworth Road and a re-acquaintance with one of our friends from the old […]
Read More
MYFOOTBALLWRITER.COM

Chelsea get never before seen opposition in FA Cup third round

Photo by Tony Marshall/Getty ImagesMorecambe FC for the first time ever! After almost a century and a fifth of action at Stamford Bridge, Chelsea will entertain never before seen opposition from the English football pyramid. Earlier today, the Blues were drawn against Morecambe FC In the third round of the FA Cup, set to take place the second weeke[...]
Read More
SBNATION.COM

Luton Town will play Reading at Kenilworth Road in the second round of the FA Cup. The tie in Bedfordshire will take place over the weekend of January 8-11, with the two Championship teams’ precise date to be decided in due course. This will be the second time the Hatters and Royals will have faced […] The post Luton to face Reading in[...]
Read More
CITIBLOG.CO.UK

Reading Away To Luton In FA Cup Third Round

Photo by Alex Burstow/Getty ImagesIt’s an all-Championship clash in the third round of the FA Cup for the Royals. Reading’s FA Cup third-round opposition has been decided... and it’s another meeting with Luton Town. The Royals faced the Hatters in the second round of the League Cup earlier this season, losing 1-0 at the Madejski [...]
Read More
SBNATION.COM

Harry Wilson is currently relishing the chance to play first-team football on loan at Cardiff City and the player on loan from Liverpool was in fine form at the weekend. Neil Harris oversaw a 4-0 thrashing of Luton Town with Wilson on hand to provide two assists for his team. The Wales international was a […] The post 'Awesome': £60,00[...]
Read More
TBRFOOTBALL.COM 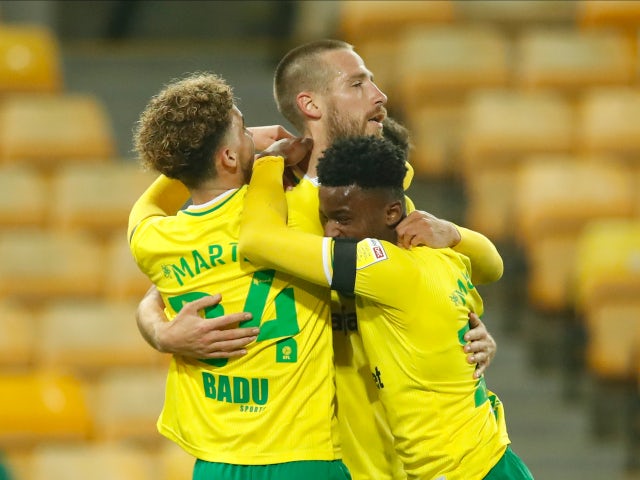 Luton Town have recalled young goalkeeper Harry Isted from non-league Wealdstone United following a shoulder injury to Simon Sluga during Saturday’s heavy defeat away to Cardiff City as the keeper slipped after clearing a backpass.  Sluga has been almost ever present for the Hatters thus far and will no doubt be a big loss for […][...]
Read More
FOOTBALLLEAGUEWORLD.CO.UK

The Bluebirds bounced back in emphatic fashion last weekend with a 4-0 drubbing of Luton Town but now must back that up when Huddersfield visit on Tuesday
Read More
WALESONLINE.CO.UK

Today is the last day of the month and a time to reflect. Back in the days when November was in its infancy we posed, via our poll, a simple question, namely: How Many Championship Points Will Luton Pick Up In November? Here at Vital Luton Town, we gave you three options to consider: • […] The post When It Came To November Perhaps The L[...]
Read More
VITALFOOTBALL.CO.UK

This Wednesday, the Hatters welcome Norwich City to Kenilworth Road, for their next Championship fixture. After the mauling Luton received away to Cardiff City, the fixture against the Canaries gives Nathan Jones side the opportunity to get back to winning ways. But, if the fixture against Cardiff highlighted our flaws then the Hatters will have [&[...]
Read More
VITALFOOTBALL.CO.UK

Wednesday evening will see paying spectators inside Kenilworth Road for the first time since late February. Okay, there may only be a 1000 but in these strange pandemic driven times we currently reside in, it is a start. But the Hatters hierarchy are in a no-win situation when it comes to deciding how the tickets […] The post Government Deci[...]
Read More
VITALFOOTBALL.CO.UK

Last week, when the government announced that spectators, in limited numbers, would be allowed to attend sporting events, I, like many others, naturally assumed that Luton Town would have 2000 tickets to distribute ahead of the Championship clash with Norwich City, on Wednesday night. It prompted me, in a cheeky article – 1999-supporters-to-b[...]
Read More
VITALFOOTBALL.CO.UK

Cardiff City can soar up table with new-look verve, adventure and goal power

Defeats are always a difficult pill to swallow but even harder when you see your side get soundly beaten and outclassed for most of the ninety minutes. Therefore, although the disappointment at the result ruined many a Saturday night, you have to admire our gaffer, Nathan Jones, stepping forward and, as reported by The BBC […] The post You H[...]
Read More
VITALFOOTBALL.CO.UK

Ahead of the trip to South Wales, to take on Cardiff City, it was acknowledged that it would be a difficult fixture. However, our blind loyalty did suggest that the Hatters might surprise everyone and get a result. How wrong we were! The Hatters produced, arguably, the worst performance of the season in slumping to […] The post Luton Support[...]
Read More
VITALFOOTBALL.CO.UK

After three straight games without a victory, Cardiff City got back to winning ways today by thrashing Luton Town 4-0 in the Welsh capital. The Bluebirds put the disappointment of a loss to Coventry City in midweek behind them, and two early goals set the tone from Sean Morrison and Mark Harris. Welsh international Kieffer […] The post 'Brea[...]
Read More
FOOTBALLLEAGUEWORLD.CO.UK The wideman scored in the Bluebirds’ 4-0 demolition of Luton Town on Saturday
Read More
GOAL.COM 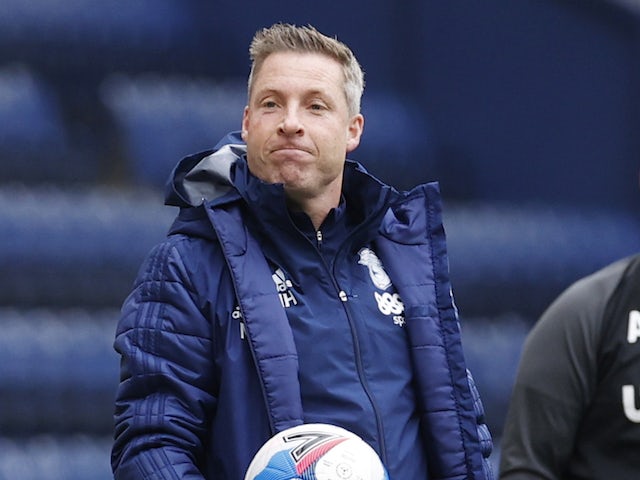 Here is how each Cardiff City player rated in the Championship clash against Luton Town
Read More
WALESONLINE.CO.UK

This afternoon, the Hatters are on the road as they to add to their Championship points total. Luton Town will be in South Wales taking on Cardiff City in what looks like a difficult fixture. But in these COVID-19 pandemic driven times, playing away from home is not as fraught with danger as it would […] The post Cardiff City v Luton Town &n[...]
Read More
VITALFOOTBALL.CO.UK

The Bluebirds host the Hatters in today's Championship clash and they desperately need a win
Read More
WALESONLINE.CO.UK

Harford? John Still? Who was Luton Town manager when each of these 15 Hatters moments happened?

It’s probably fair to say that it’s been an eventful few years for those associated with Luton Town. With promotions, relegations, financial troubles and trophy wins, it seems there has always been something going on for the Hatters in recent seasons. But do you remember who was in the Kenilworth Road dugout for some of […] The p[...]
Read More
FOOTBALLLEAGUEWORLD.CO.UK

Luton Town manager Nathan Jones has insisted that Neil Harris deserves the chance to get through a difficult period in his Cardiff career and that he has earned the right to get time to turn things around. The Bluebirds host Luton Town on Saturday in what Harris honestly admitted is the start of a ‘big […] The post ‘Has done fant[...]
Read More
FOOTBALLLEAGUEWORLD.CO.UK

The Bluebirds host the Hatters in Saturday's Championship clash; What time is kick-off? How do I live stream the game? What is the team news?
Read More
WALESONLINE.CO.UK

The manager spoke candidly ahead of the Bluebirds' clash with Luton Town this weekend following a run of below-par performances and results
Read More
WALESONLINE.CO.UK