46 million people have been through Sheffield United’s turnstiles

The Blades are enjoying sell out crowds this season as they enjoy a brilliant first season back in the Premier League
Read More
EXAMINERLIVE.CO.UK

Wayne Rooney focuses on hard work In his latest column in the Sunday Times, Wayne Rooney has focused on the topic of hard work in young players’ development in football. That lead him to focus in on former Manchester United youth player Ravel Morrison. Ravel Morrison has spent the 2019-20 season at Sheffield United, however […]
Read More
101GREATGOALS.COM

There have been some truly special goals scored at Bramall Lane over the past ten years
Read More
EXAMINERLIVE.CO.UK

Sheff Utd owner could be JAILED in Saudi Arabia if they beat Newcastle after takeover, claims ex-Blades owner McCabe

SHEFFIELD UNITED owner Prince Abdullah would risk being jailed in Saudi Arabia if the Blades beat Newcastle after the proposed takeover. That is the extraordinary claim in a letter that has reignited the bitter battle over the Bramall Lane club. Former co-owner Kevin McCabe is using a PR firm to try to discredit Saudi Prince […]
Read More
THESUN.CO.UK

Sheffield United were due to travel to face the Foxes so instead we simulated the game on FIFA
Read More
EXAMINERLIVE.CO.UK

MANCHESTER UNITED fans are clamouring for keeper Dean Henderson to come back to Old Trafford after he was named in FIFA’s Team of the Season So Far. The 23-year-old has impressed in his maiden Premier League campaign this season on loan at Sheffield United. Meanwhile, David de Gea, who penned a new contract back in September, […]
Read More
THESUN.CO.UK

Lots of Blades fans have been left drooling over a post that the club put up yesterday. He certainly has been impressive this season, just as this footage shows. The club decided to pay tribute to one of the Blades’ standout performers this season, having registered two goals and four assists in our league campaign […]
Read More
VITALFOOTBALL.CO.UK

"Just get rid of him", "Perfect scenario" - Many Man Utd fans discuss update on 6 ft 2 loanee

The Premier League is working towards a plan to resume this season but if it can't, the likely options all stack up in United's favour
Read More
EXAMINERLIVE.CO.UK

Tommy Lee explains why he left Sheffield Wednesday for United

The former Chesterfield shot-stopper has outlined his reasons for moving to Bramall Lane
Read More
EXAMINERLIVE.CO.UK

'Opportunity for Kevin Pressman to return?' - Many SWFC fans react as news emerges

Kemar Roofe has been talking about the heartache he and Leeds United faced last season as they crashed out of the play-offs at the hands of Derby County. Leeds were in automatic promotion contention all season, but eventually lost out to Norwich City and Sheffield United. Roofe had struck 14 goals in an injury-hit season, […]
Read More
FOOTBALLLEAGUEWORLD.CO.UK

A goal right out of the top drawer, that ended up in the top corner. I suppose it’s fitting in a way. I’m talking of course about the goal that Paull Coutts scored against Reading back in our first season in the Championship. We won the game 2-1 that day, and the Scottish international got […]
Read More
VITALFOOTBALL.CO.UK

The former Manchester United man only featured four times for the Blades before joining Middlesbrough on loan
Read More
GAZETTELIVE.CO.UK

The former Terriers right-back scored one of the penalties that saw them beat Sheffield United in the 2012 League One playoff final
Read More
EXAMINERLIVE.CO.UK

The list of plaudits for Sheffield United's players this season keeps getting longer
Read More
EXAMINERLIVE.CO.UK

The goalkeeper has been in superb form for the Blades this season and has kept 10 clean sheets
Read More
EXAMINERLIVE.CO.UK

Sheffield Wednesday academy goalkeeping coach Tommy Lee has agreed a controversial move to join arch rivals Sheffield United, as per The Star. Lee is most well known for his time in between the sticks at Chesterfield who me represented in over 300 league matches between 2008 until 2017. As a result of his injury, Lee […]
Read More
FOOTBALLLEAGUEWORLD.CO.UK

“Still get shivers”, “statute needed”- Many Blades fans left emotional after this footage

It may not have been the first time he cried as boss, and it may not be the last time either. But it’s still a great moment that shows just how much he cares about the club that he’s been supporting since he was a young lad. Yesterday marked the three-year anniversary of a very […]
Read More
VITALFOOTBALL.CO.UK

MANCHESTER UNITED are set to loan Dean Henderson out once again as the academy stopper is forced to bide his time at Old Trafford, according to reports. The 23-year-old has impressed in his maiden Premier League campaign this season while being borrowed by Sheffield United. But David de Gea still stands in his way at […]
Read More
THESUN.CO.UK

Manchester Utd will 'seek another loan move for Dean Henderson' 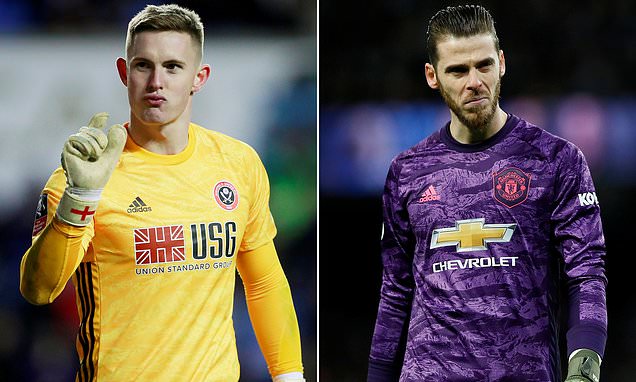 The 23-year-old has been in inspiring form for Sheffield United this season and his performances have not gone unnoticed, attracting interest from PSG, Juventus and Chelsea.
Read More
DAILYMAIL.CO.UK

I suppose this is as good a compromise as you can get. It’s not perfect by any means, but it does as least give us an advantage for the time being. According to a report from ESPN, Manchester United are set to reject any and all bids from potential suitors this summer for goalkeeper Dean […]
Read More
VITALFOOTBALL.CO.UK

The 19-year-old has been in and out of the team this season and will be hoping to get some ...
Read More
MIRROR.CO.UK

It has been 15 years since that famous night in Istanbul but former Reds defender Stephen ...
Read More
MIRROR.CO.UK

The Prime Minister's senior adviser made a statement and took questions on Monday afternoon ...
Read More
MIRROR.CO.UK
The Cricket Blog